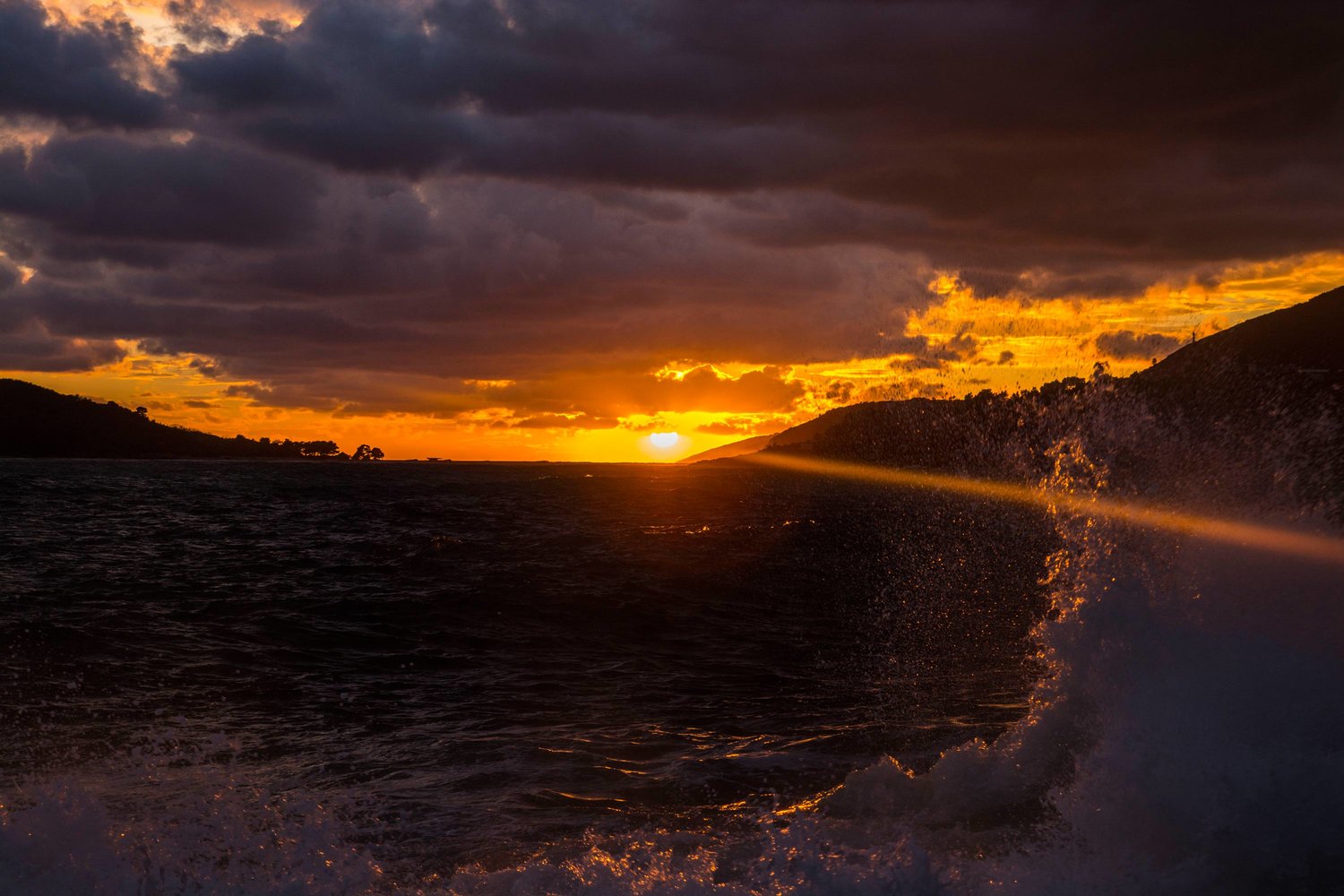 Montenegrin coastline is more than 290 km long, out of which 73 km is the length of the beaches. Except for a few that are hidden and overshadowed by the hills, all the other beaches offer unforgettable experience of the sunset. The view of the horizon, the moment it seems like the sun is touching the sky and the sea at the same time, gives the incredible feeling of peace and delightfulness.

Even though the beaches are beautiful for enjoying and watching the sunset, a lot of hills and mountains which are scattered all over the Montenegrin coastline provide unique places for observing the sun going down. Here is the list of 7 most beautiful places that are worth visiting while you are here. The entire list and the locations on it are completely random, and besides personal affinities, there aren’t any other imperatives. Its purpose would be fulfilled if someone motivated by it would visit, if not all, at least few of those places, and agree or disagree with this story

The road from Podgorica to Petrovac that goes over the mountain was the main and the closest connection of the capital city and the southern part of Montenegrin seaside for more than a decade. Now the road is bypassed with a tunnel ‘Sozina’, which truly shortens and simplifies the way. Before the tunnel (which was opened in 2005), the slow road drive due to trucks and trailers to the top of Petrovac would be followed by even slower descent towards Petrovac. The only mitigating factor for the effort invested in climbing is the reward: the view to the sea that extends for 180 degrees. Also, if you come during the bright day the moment the sun is about to go down, and in addition to all that, you can stop on several places beside the road without rushing… hmm… that really is a blessing. Those few moments, when the sun allows to be watched directly while leaving the night to us, make you forget all previous driving troubles.

The tunnel hid the greater part of traffic from this road, not just making it easier, but even enabling all the curious people to experience the unforgettable moments like this.

Peninsula Lustica is becoming an exclusive oasis where it will soon be possible to find super-luxury apartments, golf fields and yachts that are docked in small, semi-private marines. Development of this 13 km long peninsula doesn’t disturb enthusiasts and lovers of unexplored parts of our littoral. Driving along the narrow and winding road, that is surrounded at one point with low vegetation and an occasional tree and at the other one with half a meter high supporting walls made of old stones, will take you back to the period when the time was measured with sundials and by the dance of the shadows. Glades, numerous hills and headlands which form small but steep coves, offer exceptional escape from the city bustle.

The ending of the day here lasts the longest, because it is not rushed by few inhabitants of this part of peninsula that extends from Rose on the one side, to cape Veslo (Paddle) on the other side.To find an appropriate place next to the old road, sit on the hood or on the roof of the car and enjoy the view to the open sea, truly is a privilege.

That old road was the way of the first Montenegrin railway. You can still find the remains of the old railway thresholds, although it stopped being used sometime in 1959, after 51 years of operating. It was unique in the world for the width of the tracks (its width was in contrast with standards of 1cm), by the way of overcoming the rise and, in those conditions, fascinating almost 2km long tunnel, that is still in use.

Exactly this old, winding and partly damaged road offers a phenomenal view of the valley in which the city of Bar is located. While we hear the faint whir of pine trees that is mixed with surprising ship’s hooting, the sun slowly sets down. It leaves us at the mercy of the spectrum or red-pink-orange colors that simultaneously glitter on the white city buildings, gray mountain rocks as well as the swinging pine tops.

On the most exclusive part of our seaside, between Saint Stefan and Przno and beside everything else, you can find a small hill

When you get on the short, paved and stepped path that passes among the pine trees, you will reach the top and come to a small, circular, stone-lined belvedere in which a chair is literally caved. Queen Mary, nearly a century ago, liked to come and sit here. The place is named after her. Almost untouched nature offers tranquility that the sunset makes complete and timeless.

Now on that place there is a luxury restaurant. That’s the only reason why there is an ‘almost’ before the ‘free’ in the title.

Serpentines that connect the cradle of Montenegrin culture with Kotor are the real draw for enthusiasts and adventurers. Here the architectural craftsmanship has taken its most representative form, because it was necessary to overcome practically vertical climb. While climbing uphill from Kotor, the view is beautiful from many bends, but one of them is special (number 22), where you should stop. From it you can see Kotor and Tivat bay, port with a huge cruise ships and an airport while the planes are landing.

Catch the moment of refraction of the light on the mountains while the sun slowly escapes and leaves vague but still visible remains of bright yellow and red, means merging with the landscape, feel it with all your hart and completely surrender. Fantastic.

The southernmost part of our coast is also the sunniest. The peace that has governed for centuries takes you the very first moment you arrive.

The sunset on Ada is not like any other. It is inexpressible, unique, merged with waves colliding with a lazy stream of river Bojana.
Dusk doesn’t fall gradually, like everywhere else, where you can follow the movement of the shadows that slowly descends on us. Here the night falls sharply, because the sun while on the horizon sends its rays directly and straight at us, all the time, until the last glimmer.

The sunset on Ada is not like any other. It is inexpressible, unique, merged with waves colliding with a lazy stream of river Bojana.
Dusk doesn’t fall gradually, like everywhere else, where you can follow the movement of the shadows that slowly descends on us. Here the night falls sharply, because the sun while on the horizon sends its rays directly and straight at us, all the time, until the last glimmer.

And suddenly, all that you see is a halo which remains of the sun that is easily sailing to the other side. But we, we remain stunned and amazed. It seems as it could never happen. The surprise that leaves us breathless makes us want to be at the same place tomorrow, only more concentrated and cautious.

Behind the most beautiful part of Montenegrin coastline, above Sveti Stefan and Milocer, not so far away from main road, surrounded by hills, lies a small, unobtrusive plateau. The road to it is steep, unusual, narrow and hidden. But it is worth coming, it is really worth coming. There are no words, because for this place words do not exist. If the world had an emperor, she or he would rule from this place. And if I were the emperor, I’d abuse that position and appropriate this place and only this place. Everything else would no longer be of my concern.

Well… You have to come and see yourself…

The Full Montenegro: Homes, From Bargain To Bling, For All Budgets 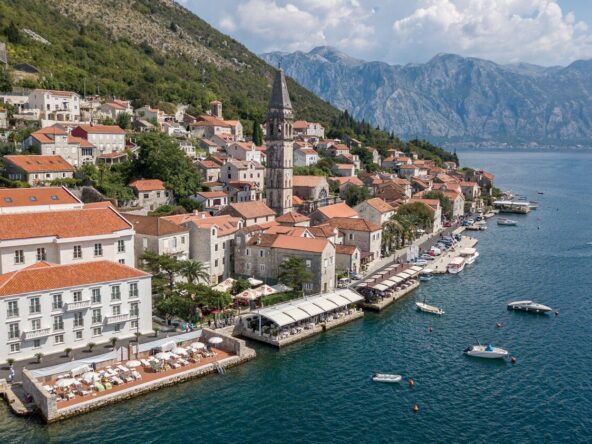 The Full Montenegro: Homes, From Bargain To Bling, For All Budgets

The tiny, ruggedly beautiful Balkan state has something for everyone.Alexandra Goss When you...
Continue reading 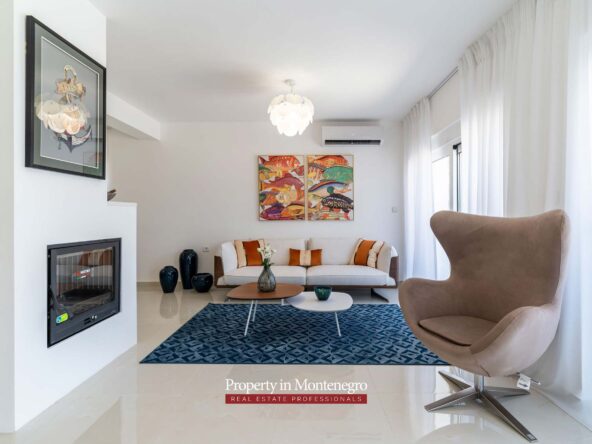 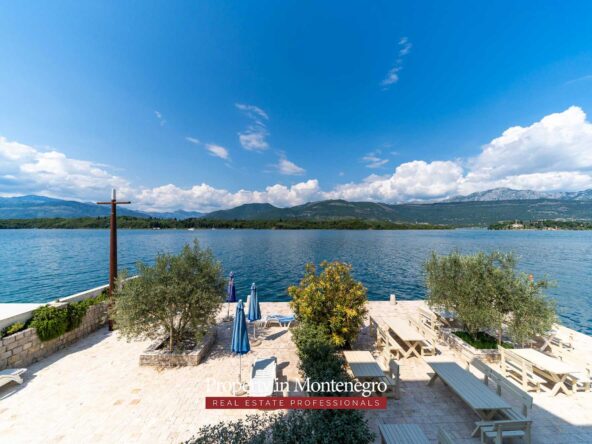 Seafront apartment on the Lustica peninsula